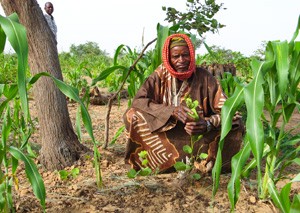 The AIFSC is thrilled that our partner World Vision Australia has been recognised for their Farmer Managed Natural Regeneration work in West Africa. They were awarded equal second place in the United Nations Convention to Combat Desertification (UNCCD), 2013 Land for Life Awards. They were ranked second out of 137 entries from around the world.

World Vision Australia has popularised the concept of Farmer Managed Natural Regeneration (FMNR) in West Africa and beyond, changing how thousands of farmers managed their land. In many degraded environments, the naturally-occurring trees and shrubs have been cut for firewood, building materials and to plant crops, but the roost remain under the ground - an “underground forest”. By managing this underground forest back to maturity, degraded forests are restored, thereby reversing biodiversity loss and reducing vulnerability to climate change. When FMNR trees are integrated into crops and grazing pastures there is an increase in crop yields, soil fertility and organic matter, soil moisture and leaf fodder. There is also an decrease in wind and heat damage, and soil erosion. Over the last 20 years, World Vision Australia has trained thousands of farmers in FMNR, resulting in the restoration of thousands of hectares in 14 countries.

“The value of traditional and indigenous knowledgesystems in environmental management today is often questioned, but in FMNR, the power of traditional knowledge systems that are combined with conventional science truly comes alive. The scale of land rehabilitation in this region and the impact it has had on the well-being of the local people is nothing short of phenomenal.” Mr Luc Gnacadja, Executive Secretary, UNCCD

Read more about the 2013 Land for Life Awards.